The Global Rockets and Missiles Market was valued at USD 58.3 Bn in 2021. The market is projected to grow USD 84.8 Bn in 2028, at a CAGR of 5.7%. The increased defense expenditure of emerging economies such as China and India is likely to drive the market for rockets and missiles. Furthermore, the market is expected to grow due to the changing nature of military technologies around the world. The development of superior autonomous missile technologies is one of the market's emerging opportunities. Terrorist attacks are becoming more common, as are territorial issues that lead to confrontations with neighboring countries. This has resulted in close quarter fighting scenarios. The electronics put into conventional missiles and rockets can now be tracked with ease thanks to enhanced detecting techniques. As a result, countries must constantly improve their technologies, making it impossible to discern between them during a fight. Governments of other emerging countries, such as India, are expanding military spending in order to purchase technologically superior rockets and missiles. These forces are driving up demand for rocket and missile production all across the world. 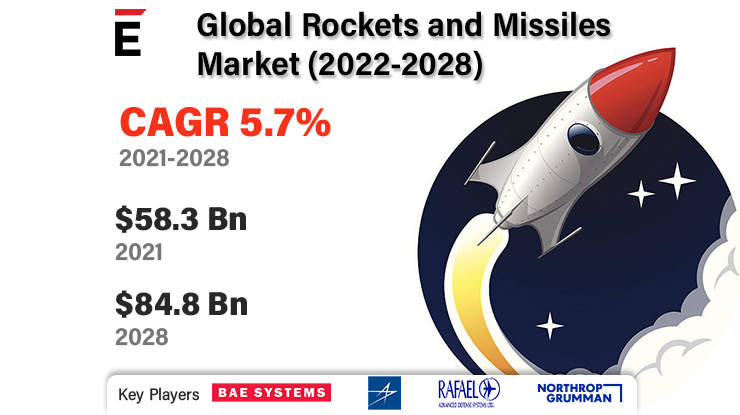 The COVID-19 epidemic has had a neutral impact on the market for rockets and missiles. The deployment of few missile defense systems has been postponed as a result of research and development operations relating to rockets and missiles. Furthermore, several companies are projected to see slack in production as the supply chain for rockets and missiles slows down owing to COVID-19. As a result, market growth will be impacted. The epidemic of COVID-19 is wreaking havoc on the military industry's bottom line. Because of the worldwide lockdowns imposed by government authorities, the major defense manufacturing enterprises have shut down. Governments all over the world have issued laws, regulations, and protocols that enterprises must follow in order to resume manufacturing.

Growing Use of 3D-Printing in Building Missiles

Complex components and structures of missiles and rockets, such as warheads, missile outer skins, fuel tanks, and missile control vanes, are manufactured using technologically advanced 3D printers. The advantages of 3D printing technology include faster product creation, single-step manufacturing, low-cost production, and increased sustainability. Because of its ability to manufacture complicated shapes and sizes of objects in a short amount of time and at a low cost, 3D printing is becoming increasingly popular. For instance, SpaceX has a big 3D printer that is being used to create parts for rocket engines now in production.

Increasing expenditure on defense programs will likely to drive the growth of global rockets and missile market. The government invests upon enormous expenditures for the military services and weapons, homeland security, and intelligence gathering. For instance, in March 2022, Northrop Grumman expanded their operations by opening of new facility in Colorado to support critical national security programs to help the nation and allies.

Increasing cross border disputes plays vital role in the growth of global missile and rocket market. Moreover, the increasing number of conflicts and high defense spending are few of the major factors driving the market globally.

High cost of national missile defenses limits the growth of global rockets and missiles market. Increasing attacks and disputes may suffer due to lack of expensive missiles for the national defense system. Moreover, technical advancements are sometimes ignored just because of the costly ballistic missiles which hampers the market growth of global rockets and missiles market. For instance, in February 2020, India is concerned of very high price of American missile shield during the contract negotiations between the two governments

North America region is expected to dominate the market share of global rockets and missiles market owing to the presence of key players and heavily investing on R&D of innovative technologies used in missile and rockets. However, Asia Pacific region is expected to witness highest growth rate during the forecast period of global rockets and missiles market due to the increasing usage of multiple re-entry vehicles (MIRV) by The People's Liberation Army Navy (CHINA) and the Japan Maritime Self-Defense Force. For instance, in February 2019, The Thales Group signed a contract with Hindustan Aeronautics Limited (India) in February 2019 to supply the Indian armed services with 135 2.75-inch (70-mm) rocket launchers.

March 2022- MBDA has recently launched MILAN Anti-Tank missile system and taken orders from over 40 countries with 360,000 missiles and 10,000 launch units.

January 2022- India has planned to export BrahMos missile to Philippines to supply a Shore-based Anti-Ship Missile System Acquisition Project for their navy defense.

April 2020- Lockheed Martin signed a contract with U.S. Army for the production of Patriot Advanced Capability-3 (PAC-3) Missile. Lockheed Martin has constructed an 85,000-square-foot extension at the Camden, Arkansas, site where PAC-3 MSE interceptors are manufactured to accommodate customer demand and increase production capacity. However, Raytheon has merged with United Technologies to create US aerospace and defense giant. The company’s aim to introduce breakthrough technologies at an accelerated pace across high-value areas such as hypersonics, directed energy, avionics and cybersecurity.