The technique of gathering information about the Earth by manufactured satellites in orbits is known as satellite data service. Satellites transmit information about changes on the planet's surface and weather. Satellite data services deal with using imaging satellites to capture photographs of Earth or other planets. Using these images for commercial purposes is known as commercial satellite imaging, which includes several applications such as energy resource security, environmental monitoring and management, border surveillance, and construction project mapping. In addition, earth imagery is crucial for a variety of applications, such as new energy resource exploration, infrastructure planning and construction, disaster management, green mapping, topographical mapping, and traffic management. Earth Observation (EO) is the most common application for satellite data. Satellite data is also employed extensively in the creation of smart cities and connected automobiles. This information is being used by urban planners to ensure efficient infrastructure management and better understand settlement patterns. 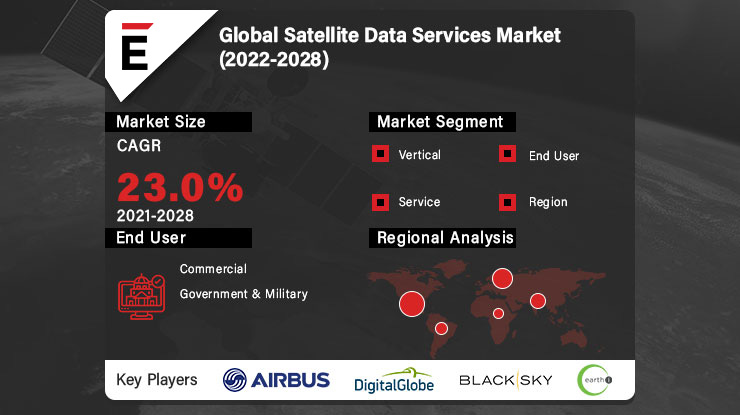 The global coronavirus pandemic, as well as the current increase in infection rates due to the Omicron variant of COVID-19, has had a moderate impact on the satellite data services market. Delays in delivery due to activity slowdowns for several satellite manufacturers has impacted on the market. This halt has had a significant influence on space launches, and other missions may have to be postponed. Also, it has impacted on business continuity strategies at all levels of supply chain. Moreover, for small businesses, the situation is even more critical. In the medium term, startups and small-sized suppliers anticipate liquidity issues, and many may struggle to continue without the help of their investors and prime integrators.

Understanding the cause and progress of an event on the Earth's surface is crucial to avoid catastrophic outcomes. Large Earth-observing satellite constellations, such as ICEYE's, have the ability to offer timely and accurate information about affected areas. EO delivers real-time observations for a specific area of interest. This relevant information is used by resource managers and other end users in their decision-making processes.

Agriculture has a high demand for satellite imaging

The government uses a lot of data in the form of photos to figure out how well the country's agriculture is doing. This information allows the government to set the price of crops in such a way that both consumers and producers profit marginally. This is one of the most effective uses of satellite data. In addition, there is a huge demand for technologies that can extract information from these photographs. As a result, technical firms are working on new and novel ways for interpreting data and presenting it in the form of visual insights. All of these advancements will be growth drivers for the global satellite data service market during the forecast period.

Satellite data services are often delivered by a constellation of tiny satellites orbiting the earth. These satellites often have lower budgets and shorter development timelines. Due to a lack of finance, the few dedicated small launch vehicle operators have had to close their doors.  In December 2019, Vector a minor launch vehicle company, filed for Chapter 11 bankruptcy, due to the lack of sufficiently affordable dedicated launch vehicles for delivering small satellites to orbit is a key impediment to the development of satellite data services.

North America is the largest market for satellite data services due to the creation of the new National Space Strategy allows the government to collaborate with private sector companies to develop a major defense system against risks from space-based attacks. Furthermore, the United States freely distributes photos captured by the Landsat satellite, resulting in productivity gains and cost savings for users. As a result of such initiatives, various small satellite manufacturers have emerged, such AAC Clyde Space and Pumpkin Space Systems Inc. which provide continuous feed about the earth's surface.

Europe is the second largest market for satellite data services due to several acts and initiatives, such as the Common Agriculture Policy (CAP), the EU Raw Materials Initiative, the UN Convention to Combat Desertification and Land Degradation, and the Soil Framework Directive, have been introduced by the European Union in collaboration with other international institutions.

The Asia-Pacific region is the third largest market for satellite data services due to the increasing population and economic development in countries of this region. Additionally, the increasing advancements of the military sector in some countries of this region are expected to amplify the regional growth of the market during the forecast period.

in March 2020, Planet Labs and Seisan, a custom software solutions and systems integration business, announced a collaboration agreement. The latter company would provide next-level competitive benefits and insights into several industry verticals as a result of the relationship.