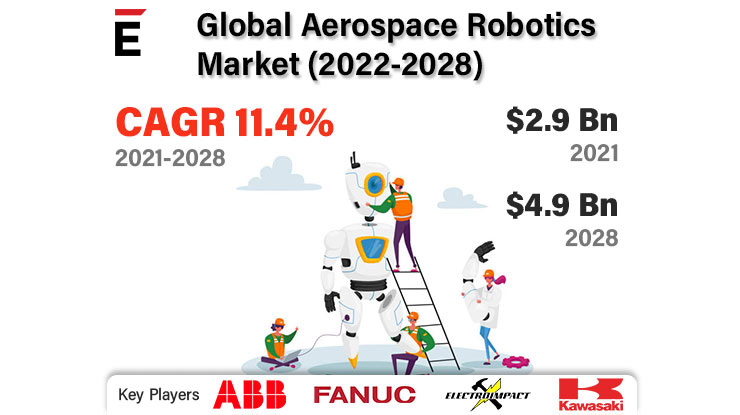 Robots are machines that enhance the efficiency of various operations in the aerospace industry, from component manufacture to the delivery of finished goods to the end customer. In recent years, there has been a growth in the use of the internet of things (IoT) in robotics. The Internet of Things (IoT) in aircraft component manufacturers has shifted the focus towards robotics, which can help reduce total labor costs while also enhancing product quality and precision in the Linear of crucial aircraft components. Reliability, high precision, speedier operations, and cost-effectiveness are advantages of robots. Scheduled aircraft deliveries and Large aircraft backlogs are posing problems for aircraft manufacturers. The use of robots to automate the manufacturing process will help to shorten the manufacturing process' turn-around time.

The COVID-19 epidemic has changed the aerospace robotics markets dynamics for the upcoming years, as demand for new planes has decreased since the coronavirus outbreak. The original equipment manufacturers in the aerospace industry are focusing on factors to overcome the COVID-19 pandemic effect such as machine operators must implement social distance and other safety standards while working in the manufacturing industry. As a result, the market for aerospace robots has evolved in a positive direction, with firms' primary focus being worker safety. As a result, demand for robots in the manufacturing process will increase, as robots are perfect replacements for shop floor workers. The aerospace robotics industry is expected to grow as a result of this.

The utilization of Artificial intelligence (AI) in aircraft maintenance has resulted in a reduction in aircraft maintenance cycles and failures. It can predict any aircraft maintenance issues before any mishap occurs. Airbus SAS is implementing smart AI-based solutions for aircraft based on data from many types of sensors. Airbus SAS has focused on AI-powered robotics for applications such as decision-making, autonomous machining, and collaborative robots (cobot) technologies. In the manufacturing of next-generation aircraft as well as maintenance, and overhaul services, aviation manufacturers want cost-effective and faster robots. As robots are coupled with AI and IoT-based systems, the concept of smart robots is an upcoming trend.

Global aircraft Linear is predicted to expand as demand for new aircraft fleets in various countries rises as global air passenger traffic increases. Recovering from the COVID-19 epidemic, companies such as Boeing and Airbus are expecting a complete recovery. By the end of 2021, Airbus plans to raise the A320 aircraft family manufacturing to 45 per month. It has urged its suppliers to plan for Linear to increase to 64 per month by the second quarter of 2023 and 70 per month by 2024. Moreover, military aircraft Linear is also increasing as the United States, India, China, Russia, and the United Kingdom boost their military spending, thereby driving the growth of the market.

Robotics automation, particularly for small and medium-sized businesses (SMEs), is difficult. Large initial capital investment is required. Furthermore, training for the employee is required to be given for the maintenance and programming of robots. SMEs use robots for a variety of tasks, including welding, packaging, and assembling. A change in the product specification, on the other hand, may result in a change in the robots' operations. As a result, customization is required, which incurs the robot's cost. Thus, these limitations may limit the growth of the market.

North America is the largest market for aerospace robotics due to the United States has greatly boosted its spending on modernizing its aircraft Linear units. Furthermore, the presence of leading manufacturers such as Electro Impact Inc. and Kawasaki Robotics is driving market expansion in the United States. Also, the government will be focusing on investing in sophisticated technology robots, which is expected to boost market demand during the forecast period.

Europe is the second-largest market for aerospace robotics due to the increasing adoption of IoT-based robots and systems in the aerospace industry. Also, large spending on the modernization of conventional robots has increased the market share in this region. 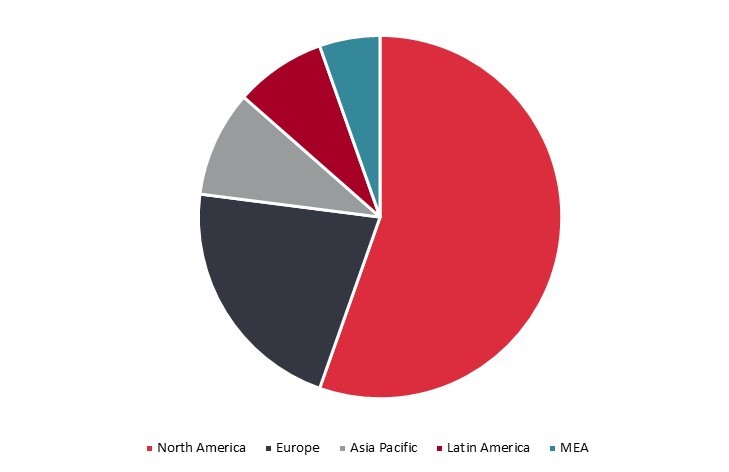 July 2021- FANUC CORPORATION stated that it had begun manufacturing the 750,000th industrial robot, setting a new peak in the robotics industry. Small - Medium Payloads Robots, food and beverage, aerospace, consumer goods, medical and pharmaceutical, warehousing, and many other industries are among FANUC CORPORATION’s customers.