The Global Non-Hodgkin Lymphoma (NHL) Therapeutics Market is projected to grow from USD 8.26 billion in 2021 to USD 12.14 billion by 2030 at a CAGR of 8.4% during the forecast period. Non-lymphomas Hodgkin's are one of the most prevalent lymphomas, and thus one of the most common malignancies. It is potentially fatal if not treated adequately, and the patients diagnosed have a shortened life span. Market competitors are conducting clinical trials for the development of new non-Hodgkin lymphoma treatments, particularly for relapsed and refractory forms.Â 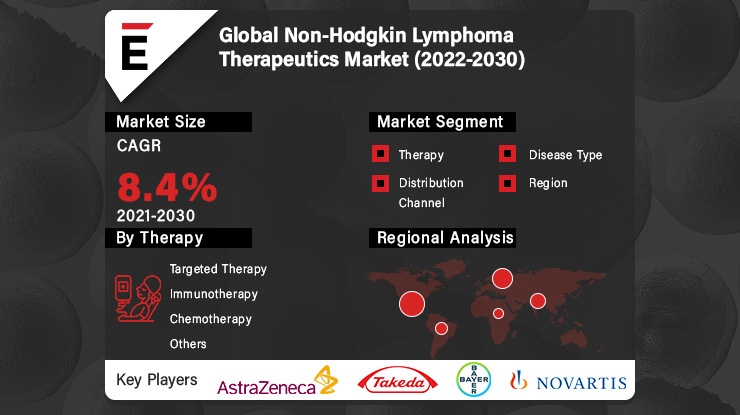 A rise in the prevalence of NHL, need for innovative pharmaceuticals and novel technologies, and an increase in the number of FDA approvals for NHL therapeutic drugs are some of the factors driving the market's growth. Diffuse large B-cell lymphoma (DLBCL) is the most frequent NHL in Western countries, accounting for roughly 31% of adult cases, according to a study published in February 2021 titled "Epidemiology, pathology, and clinical characteristics of DLBCL."

COVID has a detrimental impact on the market, as evidenced by the findings of several research studies. For example, a research study published in August 2021 titled "A case study of COVID-19 in a patient with NHL stated that non-lymphoma Hodgkin's presents a dilemma to doctors because there is concern that immunosuppressive and chemotherapeutic treatment, which is a pillar of malignancies therapy, may worsen comorbid COVID-19 infections. However, the intrinsic immune deficit associated with B-NHL, as well as the anti-lymphoma medication, may impair vaccination response. Such research shed light on COVID's unfavorable impact on the market for Non-Hodgkin Lymphoma Therapeutics in the near future.Â  Â Â Â

The launch of advanced products is one of the current industry trends in the non-Hodgkin lymphoma treatments market, owing to the increased prevalence of this type of lymphoma. Several major market players, both established and growing, have invested in new medicine releases and pipeline candidate development. This growing interest stems from the high number of individuals who are affected by these cancers and who, due to the lack of symptoms, require vigorous and precise therapy. Despite modern tests, this lack of symptoms frequently leads to the detection of cancer in its later stages. During the forecast period, this is expected to fuel the expansion of the non-Hodgkin lymphoma therapy market. As a result of the increased demand for more advanced therapies, R&D in this field is on the rise. Â Â

Several types of blood malignancies, such as lymphomas, have seen a significant increase in prevalence rates, and this pattern has been seen in several emerging countries. The high prices associated with certain types of therapy, such as immunotherapies, are one of the key impediments to the expansion of the non-Hodgkin lymphoma treatment industry. This drastically limits the number of patients who receive sophisticated and advanced treatment, leaving a considerable number of lymphoma patients untreated. Patients are frequently unable to accept these advanced treatment alternatives, which often result in superior clinical outcomes, due to a lack of appropriate payment plans and special considerations by regional governments. Â Â Â

North America is the largest market for non-Hodgkin lymphoma (NHL) therapeutics due to the high prevalence and awareness of all sorts of cancer, including various types of blood malignancies such as non-lymphoma, Hodgkin's were some of the aspects that contributed to. As a result of these trends, expensive medicines for the treatment of non-lymphomas, Hodgkin's such as immunotherapies, have become popular. During the forecast period, Europe and Asia Pacific are expected to account for a considerable portion of the global market. The advent of innovative medicines such as CAR T-cell therapies, as well as increased awareness of the signs and treatment of non-Hodgkin lymphomas, is projected to fuel market growth in Europe. In Asia Pacific, pricey therapies like KYMRIAH have been approved by regulators, and the region also has a large prospective patient population, both of which are expected to contribute to market growth in Asia Pacific throughout the projection period.

Latin America and the Middle East & Africa are two other regions of the worldwide market that are still in the early stages of development. However, due to the expanding use of sophisticated medicines, these regions are seeing higher healthcare awareness and expenditure, which is expected to lead to substantial demand for advanced therapeutics during the forecast period.

The global non-Hodgkin therapies market, like many other oncology markets, is highly competitive, with multiple oncology market heavyweights seeking for a significant market presence. Several big cancer pharmaceutical behemoths, such as Novartis AG and Gilead Sciences, Inc., have sizable market shares. Advanced and sophisticated medicines, such as targeted therapies and immunotherapies, are much more expensive than generic therapies at these companies. As a result, these pharmaceutical companies have a solid revenue position, as well as a significant market presence. Â

In June 2020, kyowa Kirin stated that their medicine POTELIGO is now available in Germany for the treatment of adult patients with uncommon malignancies such as mycosis fungoides and Sezary syndrome.

The historic period considered was 2017-2020, the base year â€“ 2021 and the forecasted period is 2022-2030 for study.
Yes, you can submit your customization request by clicking on â€śEnquire nowâ€ť or â€śSpeak to our Expertâ€ť.
Our analysts have been continuously tracking the market since 2015 and the recent study was published in 2022.
The mixed proportion is 70% Primary Interviews and 30% Secondary Research. The Information gathered through the secondary sources is verified by the primaries conducted through various industry experts. Along with this, the whole data is again re-validated through various primary correspondents in order to achieve an accurate outcome.
Our team of analysts is frequently analyzing the changes in the market. Hence, we update our study on a regular basis and provide the updated report on a quarterly basis.