The traction battery market was valued at USD 1.5 Bn in 2021. The market is projected to grow USD 2.6 Bn in 2028, at a CAGR of 13.6%. A traction battery is a type of electric car battery with a large ampere-hour capacity. Forklift trucks, locomotives, and mechanical handling equipment are all examples of Applications for lead acid traction batteries. 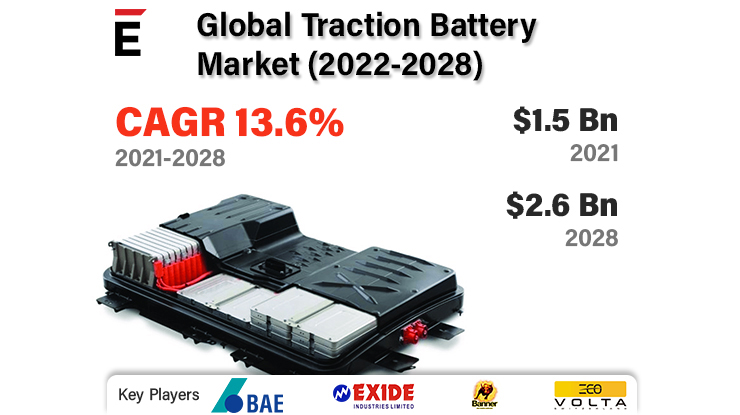 The outbreak of COVID-19 impacted negatively on the growth of the global traction battery market. reliance on the automotive, railways, and industrial sectors, the traction battery business has been badly impacted by the COVID-19 pandemic. According to a data released by the International Energy Agency, global road transport activity was about 50% lower by the end of March 2020 than it was in March 2019.

The growing demand for hybrid cars has a beneficial impact on the market's growth. It's worth noting that traction batteries are both recyclable and environmentally friendly, and are therefore in high demand in the automotive and manufacturing industries. They're also necessary for the electrification of transportation systems. They also get a lot of help from the government. The reason for this is that attempts are being made to reduce fuel emissions. The market will only grow as more individuals become aware of the harmful impacts of these contaminants.

Electrification of the Transportation Industry

Based on the Application segment, the global traction battery market is categorized into Electric Vehicle, Industrial, Locomotives. The electric vehicle segment is dominated the market share in 2020 owing to the growing demand for electric vehicles has sparked R&D efforts to improve battery efficiency by shortening the charging cycle and lowering unit consumption per charge. Furthermore, the introduction of high-energy-density batteries has intensified competition among traction battery producers for the development of highly efficient traction batteries for electric and hybrid vehicles. The worldwide traction battery market is projected to benefit from all of these factors in the future. Initiatives by the government to raise awareness about decreasing GHG emissions, which will improve the corporate outlook. The business's growth is due to government-led tax incentives and strong targets set by electric automakers to promote E.V.s across developed countries.

October 2021- Stellantis and Samsung have agreed to form a joint venture in the United States to create electric vehicle (E.V.) battery cells and modules.