Global Voltage Controller Market Size to grow by US$ 3.72 Billion in 2030. 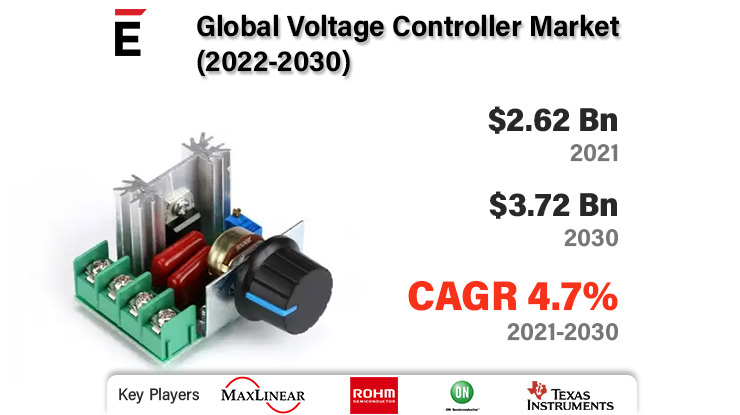 During the COVID-19, several manufacturing facilities have been temporarily shuttered as a result of government agencies' precautionary actions to prevent the spread of COVID-19, causing delays in order deliveries. COVID-19 has had a major economic influence on a number of financial and industrial sectors, including travel and tourism, manufacturing, aviation and other sectors. Economic activity is diminishing as an increasing number of countries impose and extend lockdowns, affecting the global economy. Infrastructure activities had come to a halt due to the country-wide lockdowns.

Currently, electric energy is becoming a crucial commodity all over the world. During the shift, millions of dollars have been invested in the electricity generation landscape, but a similar amount has been lost in electricity transmission and distribution. Globally, rising renewable energy penetration is pushing investments in transmission infrastructure.

Voltage controllers are enhancing the utility manage load, stabilize the system, and boost resiliency. As a result, various industries are encouraged to install a cost-effective voltage regulator for continued constant voltage electricity supply. As a result of the increased demand for stable voltage supply and technological advancements in transmission and distribution, the industrial sector is likely to dominate the distribution voltage controllers market.

North America is the largest market for voltage controller due to the United States is likely to lead the industry in terms of technical advancements and total digital transformation in a variety of industries. The rise of integrated circuits in nearly every electrical product in Europe is boosting the line regulator market. The demand for line voltage regulators will also increase as the electronics sector and the automotive electronics industry grow. The increase of the electrical and electronics sectors in countries like China, India, and Malaysia would help the market grow in the Asia Pacific region. The rise in T&D lines due to an increase in the demand for energy would also have a favorable impact on market growth. Increased knowledge of renewable energy and increased industrialization will boost the market in the Middle East and Africa. The line voltage regulator market will also increase as technology in the electrical industry advances and new electrical items or gadgets are introduced to the market.

In December 2017, Diodes Incorporated, a leading global manufacturer and supplier of high-quality application-specific standard products across a broad range of discrete, logic, analogue, and mixed-signal semiconductor industries, released AP7381. The device has a low dropout voltage of 1000mV for a 3.3V output device running at a 100mA output current and provides excellent line and load control.

Global Handheld Digital Multimeter Market Size to grow by US$ 854.7 Million in 2030.

Global Substation Automation Market Size to grow by US$ 62.5 Billion in 2030.