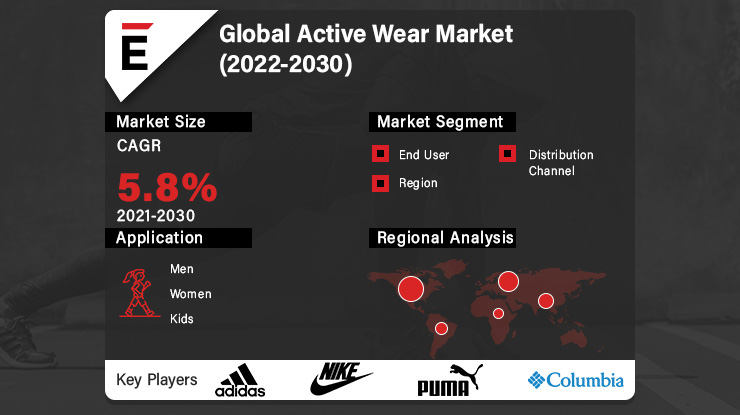 The rise in popularity of modern clothes in the gym as well as for everyday activities is attributed with the global market's expansion. Because of their heightened health awareness and desire to keep active, consumers are increasingly incorporating fitness and sports activities into their daily routines. Market dynamics have lately evolved as a result of greater engagement, resulting in higher demand for activewear clothes and sports gear.

The COVID-19 pandemic will have a significant impact on the global market. The majority of people are being forced to stay indoors and carry out their daily tasks from their residences. Home exercises and individual outdoor activities have become increasingly popular. The indoor sports and team sports sectors faltered as a result of key athletic events being postponed. Various groups ran campaigns encouraging individuals to workout from home during the initial wave's lockdown, and customers need new fitness clothing on a daily basis. As a result, the demand for activity clothes has been increased.

The growing popularity of smart sportswear, which is designed to monitor performance, improve workout routines, and provide real-time feedback, represents a market growth opportunity. For example, Inpulse, a British start-up, announced the launch of its riding shorts in January 2021, which employed AI technology to shape and stimulate riders' muscles by monitoring and offering feedback.

The growing health-conscious population, which is driving up the number of gym visits in various countries throughout the world, has fueled the demand for the product. According to figures released by the International Health, Racquet & Sportsclub Association, the United States had 39,570 gymnasiums in 2018, with more than 6 billion visits. Furthermore, the increasing popularity of fitness apps on technological gadgets has prompted people to engage in fitness activities in order to improve their health. For example, according to data released by the World Economic Forum in September 2020, fitness app usage increased by 50% in the first half of 2020.

North America is the largest market for activewear due to the region's flourishing recreational business has resulted in increased product usage. According to figures given by the Bureau of Economic Analysis, the recreational economy in the United States accounted for 2.2 percent of the current currency GDP, or USD 459.8 billion, in 2019. Furthermore, a huge number of school children participating in sports have fueled demand for the product, which is expected to drive up consumption rates. According to data given by the National Federation of State High School Associations, the United States had 7,937,491 students participating in high school sports in 2018-2019.

Global Hair Removal Products Market Size to grow by US$ 4.3 Billion in 2030.