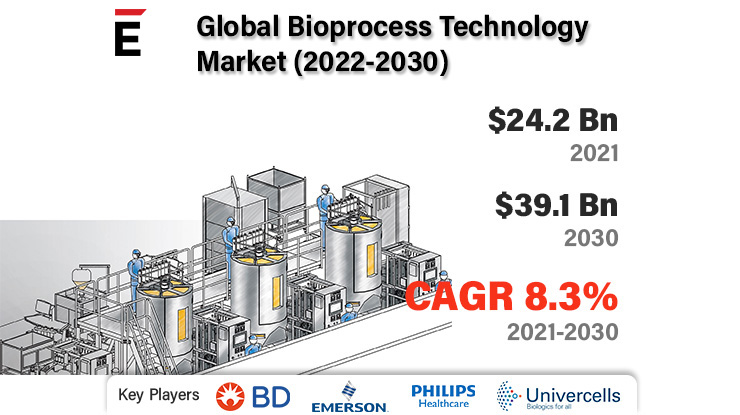 Bioprocess technology is related to the development of equipment and techniques for the production of goods such as pharmaceuticals, feed, food, chemicals, polymers, and nutraceuticals using biological raw materials. The ongoing COVID-19 pandemic, manufacturers in the global bioprocess technology industry are capitalizing on government stimulus packages to stay afloat. Untapped genetic prospects for treating chronic diseases are helping to close the gap between people who want to try new treatments and those who don't. As a result, firms in the bioprocess technology market should spend in R&D to develop new cell- and DNA-level therapeutic alternatives to extend patients' lives.  Stainless steel bioreactors are still widely used for full-scale production in North America, despite the fact that disposable systems are normally flavored in early stage development. The market in Europe, on the other hand, is being directed by an increase in demand for various items such as monoclonal antibodies, antibiotics, and biosimilar.

Recombinant proteins are in high demand for medicinal uses. The market for therapeutic drugs relies heavily on human proteins created through genetic engineering. Diabetes, cancer, viral disorders, haemophilia, and anaemia are among the diseases for which recombinant therapeutic proteins are useful. Antibodies, FC fusion proteins, hormones, interleukin, enzymes, and anticoagulants are all examples of therapeutic proteins. As the incidence of chronic diseases such as diabetes and cancer rises, the segment's growth accelerates. Recombinant proteins are also excellent tools for studying protein-protein interactions. They have demonstrated performance in ELISA, Western Blot, and immunohistochemistry, among other laboratory techniques. Enzymatic assays can be developed using recombinant proteins.

The increasing prevalence of cancer and other chronic diseases is driving demand for bioprocess technology improvements. The worldwide bioprocess technology market's revenue prospects are growing in tandem with the pharmaceutical industry's expansion. The increased demand for vaccines and proteins has prompted pharmaceutical and biotechnology businesses to boost medicinal production, research studies, and other research.

Outsourcing biopharmaceuticals is developing as a promising method for meeting unmet medical needs among patients. As a result, more bioprocessing systems with higher process efficiency and throughput are being used. These solutions provide a competitive advantage in terms of regulatory compliance. Because of increased capacities and capabilities, an increasing number of biopharmaceutical companies are choosing for single-use systems, which provide cost-efficiency and technological breakthroughs.

North America is the largest market for bioprocess technology due to the rising need for high-quality biologics, as well as increased R&D spending by key players in the region. The existence of important companies, the high frequency of chronic diseases in the region that are treated mostly with biopharmaceuticals, and developed healthcare infrastructure are all contributing to market expansion. Additionally, favorable government initiatives and an increase in the number of research partnerships are projected to propel the industry forward. Because of its supporting healthcare legislation, large patient population, and developed healthcare sector, the United States has the most shares in this region.