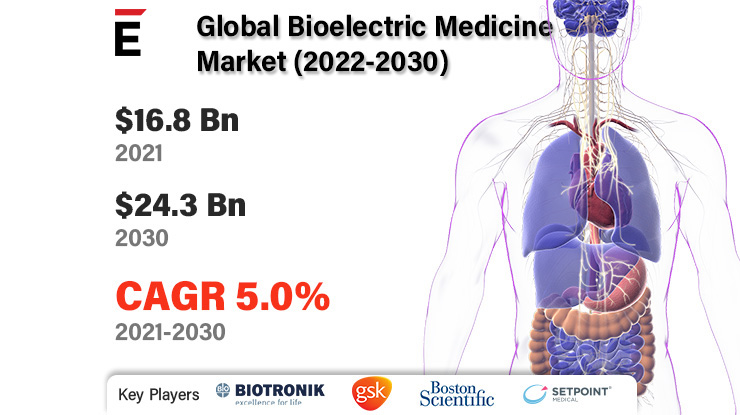 Bioelectric medicines are medical devices that use electrical impulses to influence changes in bodily functioning. Electroceuticals are a non-drug option that is projected to become the gold standard of disease treatment in the future. Electroceuticals, unlike other muscle or tissue stimulators, work on the basis of neurostimulation, which is the electrical manipulation of the neurological system. Current treatment options for a variety of neurological illnesses and other disease states rely on drug-based treatments, which have numerous side effects and have failed to deliver on their promises of outcomes. Electroceuticals have been used to treat a variety of diseases and ailments, and they are effective in both invasive and non-invasive approaches. These are thought to be a true substitute for drug-based medications in future.

The COVID-19 outbreak has increased the use of remote surveillance. Remote gadgets like portable pacemakers and non-invasive bioelectric devices connected to the internet that allow clinicians to deliver therapeutic advice to patients regardless of distance are gaining popularity among IT businesses, health professionals, and patients. The epidemic has aided efforts in this area by putting a greater emphasis on smart monitors and wearable technology. These devices could be valuable during the pandemic for a variety of reasons, from detecting undiscovered cardiac issues in patients who miss routine medical checkups to studying COVID-19 patients' responses to experimental heart drugs.

The global bioelectric medicine market is expected to develop due to an increase in product approvals and improved regulatory management by regulatory bodies. Cancer-Code Corporation (C3) announced the issuance of a patent in March 2014, titled Method and System for Processing Cancer Cell Electrical Signals for Medical Therapy, which includes a unique method to cancer eradication in people and animals. Moreover, the increased investment in the development of bioelectric medications is boosting the growth of the market during the forecast period. In 2016, Medtronic Plc, a bioelectric medicine company, spent around US$ 2,224 million on overall research and development of advanced bioelectric medicine products.

The elderly population use modern bioelectric drugs such implantable cardioverter defibrillators, cardiac pacemakers, cochlear implants, and spinal cord stimulators to treat these diseases. As a result, the expanding senior population is expected to fuel the market for bioelectric medications. Furthermore, the increased frequency of chronic disorders such as cardiac and neurological difficulties is expected to boost market growth. Despite the growing popularity of bioelectric drugs, the injection of funding and research into bioelectric medicine innovation could present a new opportunity for the market throughout the forecast period.

The Asia Pacific bioelectric medicine market is predicted to grow rapidly over the forecast period, owing to rising prevalence of chronic conditions such as diabetes and hearing loss, as well as the region's rapidly growing elderly population. According to the International Diabetes Federation, there were about 114,394,800 diabetes cases in China in 2017. Furthermore, according to the World Health Organization, roughly 27.8 million Chinese people suffer from hearing loss, with 11 percent of persons aged 60 and up suffering from hearing loss.

In March 2021, Medtronic plc (Ireland) got FDA approval for their Intellis Platform with Differential Target Multiplexed (DTM) programming, which is used to treat chronic intractable back and leg pain.