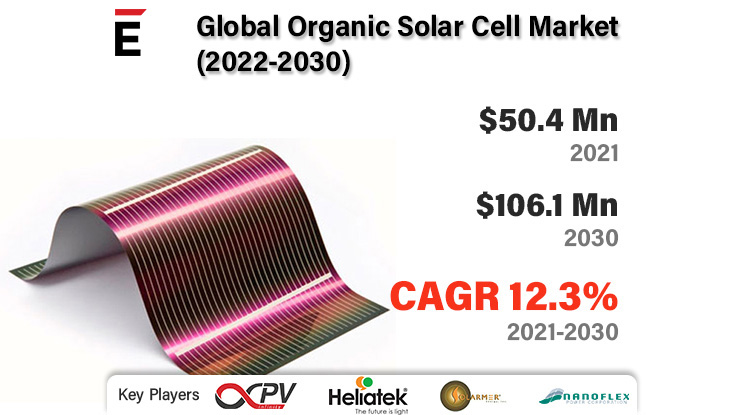 Advancements in nanotechnology and molecular engineering propel the production of organic solar cells. Organic solar cells are becoming increasingly popular due to their numerous advantages. In the future years, this element is expected to contribute to market growth. Organic solar cells have a shorter lifespan and have a lower efficiency, which are two significant issues limiting their expansion. Furthermore, the solar industry's infancy necessitates a large financial expenditure in research and development of new products. Organic solar cells, on the other hand, are being developed by research organizations and businesses to have the same efficiency as conventional solar cells.

The COVID-19 pandemic has impacted negatively on industries and businesses all around the world. The pandemic's lockdowns and social distance restrictions have stifled economic activity, interrupting supply chains, delaying projects, creating a labor shortage, and driving down demand for products and services. Governments all across the world are working hard to alleviate the suffering caused by the pandemic. The worldwide renewable energy business is largely reliant on imports from other parts of the world.

Rapid industrialization, urbanization, and population growth necessitate adequate electricity supply. Various governments are concentrating their efforts on generating energy from renewable sources. Market players are looking for ways to meet the growing demand for organic solar cells from consumers all around the world. The global organic solar cells market is boosted by technological improvements in photovoltaic and the growth of solar plants in developing nations.

BIPV products provide additional functionality to a structure unlike standard construction materials. Buildings that adopt this technology become energy producers rather than energy consumers. To do this, building technology must be combined with BIPV technology. BIPVs shield buildings from the elements and noise. They also provide thermal insulation. Because BIPVs do not require brackets or rails, this technique reduces total building material and installation costs. Their popularity has continued to rise since then. BIPV devices are being used in unique ways by designers and architects, and manufacturers are continuing to develop new solutions to suit the growing demand.

Europe is expected to dominate the global market for organic solar cells due to large investments in organic solar cell R&D by nations such as France, Germany, and the United Kingdom would add to the region's significant market share. In Europe, BIPV technology is in a phase of transition, with the legal framework having a favorable impact. The European Union (EU) established the Energy Performance in Structures Directive (EPBD) and the Renewable Energy Directive, opening the path for near-zero energy buildings.

Due to increased investments by large corporations, particularly in China and Japan, Asia Pacific is expected to grow significantly throughout the projection period. Because of government policies that encourage renewable energy generation, China and India are likely to be prospective markets.

In 2022, to enhance and further grow the worldwide OPV market, an ARMOR Group company, the global leader in organic photovoltaics (OPV), has partnered with Epishine, a significant player in the development and production of printed organic solar cells now focusing on indoor OPV.

Global Biomass Power Generation Market Size to grow by US$ 107.2 Billion in 2030.

Global Carbon Capture and Storage Market Size to grow by USD 3.27 billion in 2030.

Global Electrical Conduit Market Size to grow by US$ 25.3 Billion in 2030.