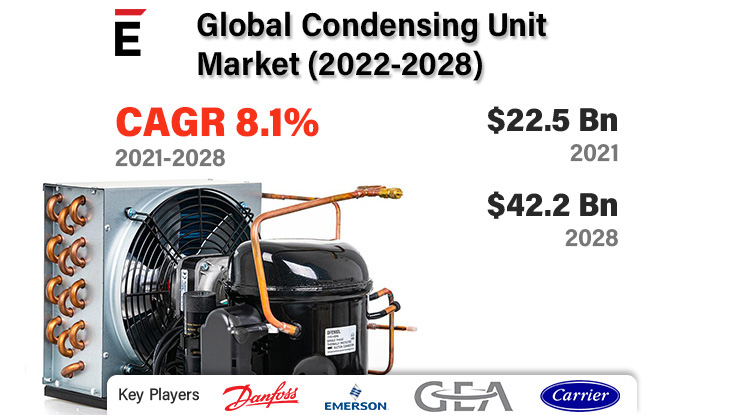 The growth of the Condensing Unit Market is being driven by factors such as an increase in demand for condensing units in the commercial and industrial sectors in emerging countries, as well as the advantages supplied by these units, such as greater sturdiness and duration. Growing demand for condensing units in the corporate and industrial sectors of developing nations, rising demand for higher-quality condensing units for a variety of applications, and expanding retail sector growth are a few of the major drivers that can propel the Condensing Unit Market growth during the forecast period.

During the COVID-19 pandemic, almost every industry in the world suffered a setback. This can be ascribed to severe disruptions in their respective manufacturing and supply-chain operations as a result of various precautionary lockdowns and other limitations imposed by governments all over the world. The same applies to the market. Furthermore, consumer demand has decreased as people are now more focused on removing non-essential expenses from their budgets since the general economic situation of most people has been badly impacted by the outbreak. Over the forecast period, the aforementioned factors are likely to weigh on the worldwide Condensing Unit market's revenue trajectory. The global Condensing Unit market is likely to rebound as respective governing agencies begin to lift these enforced lockdowns.

Condensing units are temperature-control systems that exchange energy in the form of heat by compressing a refrigerant, pushing it through a series of coils, and heating and cooling areas with the air surrounding the coils. In the next years, rising infrastructure spending, particularly in Asia Pacific's developing countries, is likely to propel the worldwide condensing unit market growth. Various infrastructure projects, such as metro rail and airports, are in the planning and development stages in India. In 2018–19, the Airport Authority of India (AAI) spent roughly USD 2.32 billion on extending existing terminals and building 15 new ones. In addition, the airport industry has been extended to private engagement, with six PPP (Public-Private Partnership) airports being built throughout major cities. Furthermore, between FY 2018 and FY 2023, India's airport infrastructure is estimated to receive investments ranging from USD 5.99 billion to USD 6.41 billion. Furthermore, the growing global population, as well as rising disposable income, particularly in developing nations, are key drivers that are predicted to boost the global condensing unit market.

Environmental Limitations on Refrigerants Will Constrain the Market.

The EU Commission's F-gas (HFCs, PFCs, and SF6) regulation, which was updated in 2015 in order to reduce growing emissions, may limit the worldwide condensing unit market. This also encourages condensing unit manufacturers to improve their technology, resulting in energy savings and environmental friendliness. Furthermore, the growing amount of complications and uncertainties for producers will make restrain market growth.

The Asia-Pacific is the second-largest market for condensing units due to the rising disposable income and rising infrastructure spending in this region. Moreover, in terms of value, China is expected to occupy the lion's share of the regional condensing unit market. Natural refrigerants are being promoted by the Chinese government for a range of uses. These refrigerants are used mostly in heat pumps and room air conditioners.