The global Automotive Camera Sensor Market is projected to grow from USD 2231.02 million in 2021 to USD 5151.04 million by 2028 at a CAGR of 11.0% during the forecast period. Hybrid electric car usage is expected to increase industry demand. The growth can be attributed to rising concern and awareness about the pollution caused by greenhouse gases released by internal combustion engine automobiles. 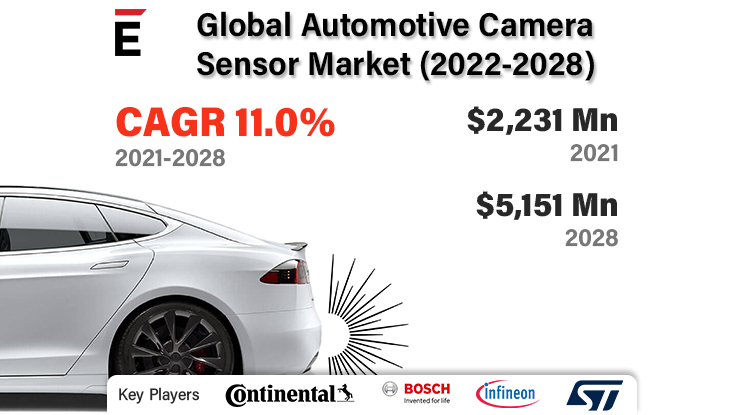 The market's growth is being fueled by the increasing deployment of ADAS features in vehicles. Governments in many countries across the world are increasingly enacting legislative measures to encourage the installation of ADAS systems in new automobiles. In the United States, for example, 33 states introduced laws on autonomous vehicles in 2017, while 15 states adopted 18 proposals in 2018. As a result of these supportive steps taken by governments around the world, the need for improved camera sensors is increasing

COVID-19 ANALYSIS
In 2020, the COVID-19 outbreak had a detrimental impact on the automotive camera sensors market, resulting in lower demand for car sensors. As a result, the revenue earned by them has decreased. As a result, the market's growth slowed significantly in the first half of 2020. This trend persisted until the first quarter of 2021. In the second or third quarter of 2021, the increased production volume of passenger automobiles and hybrid electric vehicles is predicted to drive up demand for automotive sensors.

Growing Demand for Advanced Technologies, Comfort, And Safety Is On the Rise Indicating a Positive Market Growth Trend

3D magnetic sensing can be used to optimize form factors in the car, such as position sensors for gear sticks, pedals, and transmission moving parts. 3D gesture sensing is being developed by companies like STMicroelectronics and Elmos to increase driver concentration and reduce manual management of functions like vehicle lighting and infotainment. As a result, increased use of new technologies is a favorable trend that is propelling the market growth during the forecast period.

Due to increasingly stringent legislation and safety tests and growing awareness about vehicle safety, the autonomous capabilities of commercially accessible vehicles are expected to develop rapidly during the forecast period. For instance, in developed countries, features such as cruise control and lane-keep assist are required on all vehicles, and blind-spot monitoring is regulated, particularly in Europe.

Europe was the largest region in terms of value in the automotive camera sensor industry. The region's dominance is due to the growing popularity of vehicle automation and the growing demand for connected cars. Furthermore, the European Union (EU), laws enacted under the General Safety Regulation (GSR) updated as of 2018 governing the installation of specific safety systems in vehicles are adding to the growing popularity of these sensors in this region.

The Asia Pacific is the second-largest market for automotive camera sensors due to the increasing usage of electric cars in China, South Korea, and Japan, which is driving regional growth. Several government policies and activities encouraging the usage of electric vehicles have boosted market potential in the region for automotive sensor manufacturers. For example, in January 2021, South Korea's Environment Ministry announced a USD 891.7 million electric vehicle subsidy budget for 2021. Fully subsidized electric vehicles with a price range of less than USD 53,000 will be available.